In the previous post  I described how Mark Leusink and I are going to be speaking about Angular.js in our presentation at ConnectED later this month.

This application was created by Mark Leusink and is an amazing example of how simple an Angular application can be integrated with Domino data. The application is fully responsive and is particularly nice to use on a mobile device. All credit goes to Mark for this, I am very flattered to be talking with such an astute and talented developer. You can find out more about the application from Mark’s blog – http://linqed.eu/2015/01/14/marky-marks-mobile-first-connected-sessions-demo-app/

The application is running on a Domino server. 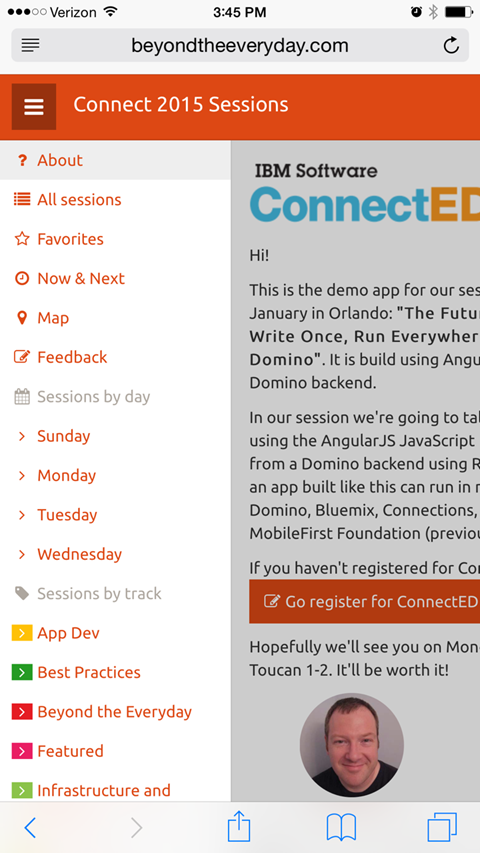 If you are still not sure, listen to Pete Janzen talk about his recommendations for the conference 😉

Turns out that it was Skype – well there you go. I turned off Skype and the http task loaded just fine

Once the server was loaded and http was running, I then started Skype and there was no problem !

For full disclosure, I used jQuery with Domino long before v8.5 at a time when the dojo documentation sucked big ones and it was nearly impossible to figure anything out. Today though that is much improved and the dojotoolkit website and the work done by sitepen have done a lot to catch up.

I am more familiar with jQuery syntax and the core library capabilities and I think I will always prefer to use jQuery than dojo given a choice and even playing field. In traditional Domino it is a level playing field as neither library is loaded by default. But that all changed with XPages and I am forcing myself to have to learn dojo because it just doesn’t make sense to use jQuery “just cos dojo sucks”.

jQuery does not conflict with dojo and can be used very successfully in tandem with each other. But there are some things to consider before you do.

So why shouldn’t I use jQuery?

If you are going to add jQuery there has to be a good reason/purpose other than “‘cos I like jQuery and dojo sucks”. If you add a jQuery library you are:

So if you are just doing a basic selector to get a page element or a basic animation, there is really nothing dojo can’t do any worse than jQuery. If you want to see a simple comparison between dojo selectors and jQuery selectors check this out

Dojo & jQuery side by side. Part 1: DOM Basics

Dojo & jQuery side by side. Part 2: Animation

So when should I use jQuery?

When you can’t do something you need to in dojo, or just just does not make sense to re-invent the wheel. jQuery is now more popular than Flash in terms of web usage for the most popular sites. dojo isn’t even on the map when it comes to web usage tracking. In terms of community size and usage jQuery dwarfs everything else and because of that there is a lot of libraries to chose from.

In an XPages environment, the real benefit is not so much using jQuery itself, but in taking advantage of the thousands of plugins available which other people have written. There are plugins for everything from:

I think I am going to start a series of weekly jQuery plugin examples (in XPages) to show what can be achieved very easily with the minimum of code. Let’s see how far it takes me before I run out of the over 4000 jQuery plugins and jQuery mobile

Very quickly and easily we can create a pretty good looking data view as an XPage – drag and drop a view control onto your page and your off in under 60 seconds – very simple, very functional.

However, for many users though (especially “older” corporate users, who are usually the ones making decisions on your projects and paycheck) it is simply not enough to be “functional”, it needs to be EASY. For example:

User’s expectations are based on their experience with the internet and everyday that gets higher and higher. As developers we are always looking for ways to make our pages look snazzier and also easier to user at the same time.

Here are some simple tricks using jQuery and my x$ function.
Add all the following to the onClientLoad event of the XPage.

This process is just as applicable to any normal Domino webpage (non-XPage) with an embedded view in it.

I have been asked to add the style sheet which you will need to add to see the effects. Ideally you should add it to a Stylesheet and add it to the XPage as a resource, but for the sake of demonstration just copy and paste this into the source code at the top under the <xp: view tag