I guess I should have seen this coming, but it is a good thing – the Bluemix docker documentation has been updated since this post was published. It is still worth reading to learn a few things about docker – but the referenced documentation site does not look like it is detailed in this post (less than 24 hours later!!)

Currently access to containers within Bluemix is at BETA (May 2015) and you have to request access to get to it. I am writing this for my own sanity and documentation…….

The instructions for installation are here

Having had to figure out how to give my boot2docker access to the internet to download files for Step 1, Step 2 was no easier…

Well when I tried that I got this……

wget vs curl: How to Download Files Using wget and curl

Using curl -O instead of wget it works

Abandon all faith ye who enter…..ok what next

I tried to download the file (https://cli.run.pivotal.io/stable?release=linux32-binary ) with chrome dev tools open and I saw this URL – http://go-cli.s3-website-us-east-1.amazonaws.com/releases/v6.11.2/cf-linux-386.tgz

so I tried this – and it worked

then this failed – sudo tar -zxvf cf.tgz -C /usr/bin/ because the name of the file is really cf-linux-386.tgz

“Note: If you are using Boot2docker, set the variable in your Boot2docker VM.”

So I checked the docker git site…https://github.com/boot2docker/boot2docker which states clearly…

I also saw to run boot2docker up and oooooo look at that export !!! 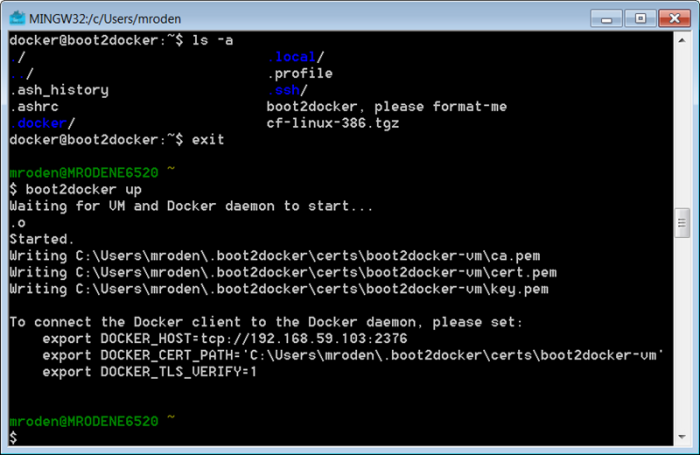 “You are ready to install the IBM Containers Extension.”

Steps 1 – 5 and none of them worked as per the instructions. I have done my part and commented on the post stating as such, but wow !!!

You can’t make this up…..more as soon as I can figure it out….or not !

I did learn a bunch about curl, boot2docker, oracle VirtualBox so not a total waste