Skip to content
HomeAngular.js in XPages #1 – Using the right IDE for development

In this article we will look at Webstorm (a Javascript IDE) and discuss how that relates to the traditional XPages development environment.

Better Tools make better applications (or something like that). It’s true to an extent, you can’t help a poor developer make a great application but with better tools you can make a good developer more productive, which ultimately makes for a better application (probably). In the XPages development world the tooling we have is all based around Domino Designer in Eclipse (DDE). Eclipse as we all know is an open source tool which while originally designed for Java development has been extended to cover development of many programming languages. There are XML editors, JavaScript editors and many others. In the XPages world we are also “stuck” with quite an old version of Eclipse and are unable to take advantages of newer capabilities and plugins for modern eclipse development. DDE “works” but it is far from a fantastic experience, especially from a “web development” perspective. In these articles I will not be using DDE very much at all. We are going to look at Web Development using Domino Data, not doing web development using Domino.

I am no expert on Java development using DDE but from what I have picked up there are others who are doing their pure java development outside of DDE and then importing it into DDE to run in their applications. For power-developers stability and speed are just as critical as flexibility and practicality.

There are a number of tools currently en vogue for web developers. SublimeText is a very powerful text editor and Github have release a new “Atom” editor which is getting a lot of press right now as well. I am going to use JetBrains Webstorm for these articles. Webstorm is a great IDE and comes with a bonus of having Angular integration built in.

Webstorm is not a free tool – you have to buy a copy – but IMHO it is worth it. $50 for a personal license is about 1/2 hour of your productivity and it will pay for itself inside of a few days. There is a 30 day evaluation period which I encourage you to try 🙂

For a full list of examples check out the demo page – http://www.jetbrains.com/webstorm/documentation/ but here are some of the cool examples:

Why not use DDE and XPages?

Well first and foremost because an “XPages” is an XML document and because of that, DDE requires it to be written using correctly formed XML. HTML is not correctly formed XML and causes issues. Let me demonstrate: If I want to create the following HTML inside of DDE I get an error:

Seems simple enough but we really should use the right tool for the right job.

This is particularly important when we start to look at Angular directives which rely (when not using the HTML5 standards) on the single word attribute in the HTML element.

Secondly, as you will see from the examples in the upcoming articles I will be creating HTML pages not XSP pages. These can still reside inside of the database but are not “XPages”. I will not be using XPages “controls” and in fact not using Dojo either. So there is no benefit to using DDE at all in this case for my front end development. I will be using DDE to create REST services (maybe) and I would use DDE to create Java code to supply data to the user.

Finally –  Eclipse is a large tool and is frankly slower than me. It’s a frustrating when I constantly have to find something to do while a database waits to open, checks mail, Builds something, crashes in a corner quietly. I won’t miss using it.

Even if we are not working with a Domino server, we still need to be able to review and test what we are working on.

In Webstorm you can preview your code as Webstorm generates it’s own local basic web server. The web server is configurable and as we will come to see it will help us in our Domino development environment as well. 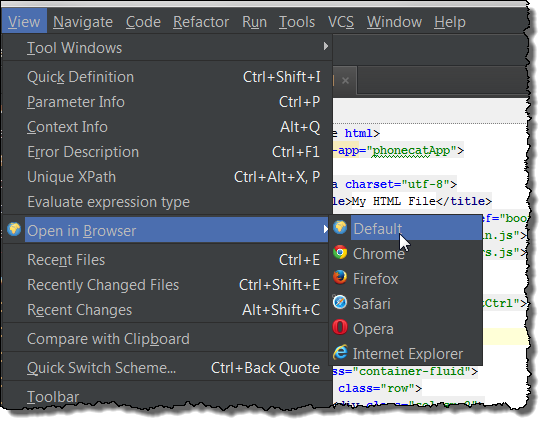 One really nice feature about the debugger is that it allows Live editing, so you can edit and build you code and watch in real time as the code is updated on the screen. This is very cool when you are building out your HTML templates. I this case on a large monitor I have the IDE on the left and the browser on the right. You can see this technique in action on the http://egghead.io angular tutorials.

Starting to type into the debugger window you see the HTML updated on the right – Angular does not update the {{phone snippet}} because the template has to be redrawn. HTML on the other hand is redrawn immediately

As we will come to see this will allow us to take data from Domino without worrying about CORS issues. For more on the debugger read here – http://www.jetbrains.com/webstorm/webhelp/using-jetbrains-chrome-extension.html

Even in the short time I have been using Webstorm I have found it to be an exceptionally quick development environment compared to DDE. DDE certainly has its place but even if I am not using angular for future projects I am seriously going to consider doing as much of my development using Webstorm rather than DDE.

Tooling is a very personal thing for a developer, in this case when I am approaching the project from a Web Development perspective and creating web pages without the overhead of the JSF lifecycle, there really is no need to use DDE to build these examples. I am going to use XPages for data sourcing and CRUD.

I do not want this to become a discussion of whether this approach or not this is right or wrong and I encourage everyone to consider their comments before posting. The point of this series is for education and mind broadening, driven by my own selfish desire to learn and broaden my mind.

Just so you know Jetbrains also make a Java IDE which is used for android development – http://www.jetbrains.com/idea/ – another alternate to eclipse. Again it isn’t free, but may be worth checking out because free doesn’t mean the best (and visa versa).

10 thoughts on “Angular.js in XPages #1 – Using the right IDE for development”